is a collective of jazz musicians and composers, performing original jazz that crosses genres, entertains, and captivates. 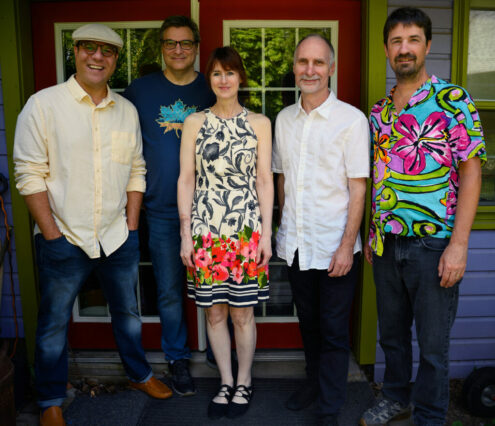 Jazz flutist Patricia Julien is a theater, media, and concert music composer working with acoustic and electronic instrumentation. She writes extensively for theatrical productions and also composes works for mixed-voice choral ensembles, solo voice and piano, orchestra, contemporary chamber ensembles, small jazz combos, and big band. She holds the M.M. in Jazz and Commercial Music from Manhattan School of Music and the Ph.D. in Music Theory from University of Maryland, College Park. She is Professor of Music at the University of Vermont. Patricia has appeared in concert at Carnegie Hall, Weill Recital Hall, Alice Tully Hall, and The Kennedy Center. Concert tours with Persian singer Dariush included the eastern United States, Canada, and Europe. While living in New York City, she performed frequently at Birdland, The Knitting Factory, The New Music Café, CBGB’s, and The 55 Bar, and has worked with such artists as Ari Hoenig, Ron Elliston, Atilla Engin, and Kenny Wessel. Now living in Burlington, Vermont, she performs with musicians throughout the region.

David is a music educator, pianist, and composer living in New York’s Capital Region. He received an M.A. from Tufts University where he studied ethnomusicology and composition. As a jazz and Latin pianist he has performed with ensembles such as RumbaNaMa, The Boston Latin Band, The Either/Orchestra, Bopitude, the Big Soul Ensemble, and the Empire Jazz Orchestra. He has also performed with Lee Konitz, Laurel Masse, Fred Wesley, Gary Smulyan, Danilo Perez, Rufus Reid, Antonio Hart, John Fedchock and others. He lead the critically acclaimed Latin jazz ensemble Sensemayá which recorded two albums “Shake It!” in 2010, and “La Madrugada Habanera (Havana Before Dawn)” in 2011. David has taught music for over 20 years including at the John Sayles School of Fine Arts, SUNY Schenectady, and the Rensselaer Polytechnic Institute. He is featured on a number of albums including Keith Pray’s Universal Blues, and “1-2-3- Go!” by Michael Benedict’s Jazz Vibes. David Gleason is also the author of Alfred Publishing’s “The Total Blues Keyboardist.”

Alec is a guitarist, composer, graphic designer, and educator. He has played guitar and composed for Vermont jazz groups the Alec Julien Quartet, the Patricia Julien Project, and Fragile Zoe, and performed as a sideman for folk phenom Karen McFeeters. His compositions run the gamut from introspective jazz to frantic funk to mindless rock and roll, and have found their way into a great many modern dance pieces. He has a B.A. in music and math from Bennington College, as well as two M.A.s in philosophy. His philosophical studies have driven home his disposition for mathematical antirealism.

Pete Sweeney is a drummer, author, and educator. He has written 20 instructional books for the Alfred Publishing company including “The Versatile Drummer”, “Drummer’s Guide to Fills”, and the “Drum Atlas” book series on Cuba, Jamaica, Salsa, and Brazil. He has also written 5 drum curriculum books for the School of Rock national franchise. He is currently a faculty member of Bard College at Simons Rock and the Berkshire Music School. He was a guest teacher at the 2014 Ju Percussion workshop in Taipei Taiwan. Pete has performed, toured ,and recorded with many great musicians such as Pat Metheny, Lee Ritenour, Robben Ford, John Abercrombie, Larry Coryell, Ronnie Earl, Duke Robillard, Mick Goodrick, Steve Bailey, Johnny Copeland, Ed Mann, Andy Summers, Dweezil Zappa, Dan Toler, and many others.